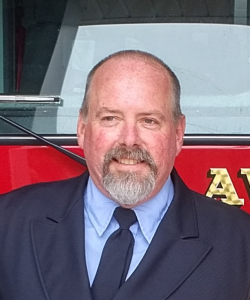 “The members of the Avalon Volunteer Fire Department wanted to recognize John for his outstanding achievements his spirit of volunteerism that will endure in the Department for generations to come”, said Avalon Volunteer Fire Department Chief Ed Dean.  “Assistant Chief Ferguson had an exemplary career with the Department and our expression of support for this prestigious nomination is a tribute to not only John, but to his loving family who also selflessly gave of their time to enhance the public safety efforts provided to the Borough and its property owners”.

Assistant Chief Ferguson answered his final call on Tuesday, October 17th, surrounded by family and friends.  He was honored with the 2016 Avalon Volunteer Fire Department’s “Firefighter of the Year” award.   John also was involved with the Cub Scouts and Boy Scouts and was active in the First United Methodist Church of Avalon.  Assistant Chief Ferguson is survived by his wife Carol and four children.

Services were held for Assistant Chief Ferguson in Avalon on Tuesday, October 24th which included a final tour of Avalon courtesy of a fire department truck.

This is the first time in the Department’s 104 year history that a member has posthumously attained the rank of Assistant Chief.