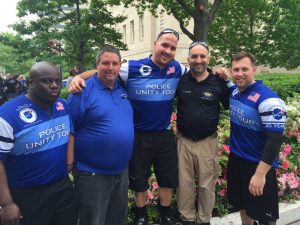 (Avalon, NJ)—The Borough of Avalon participated in the annual Police Unity Tour as law enforcement officials bicycled from southern New Jersey to the National Law Enforcement Police Officers Memorial in Washington, DC.  The Avalon Police Department had three members of the Police Department and two volunteers from emergency services supporting the event that concluded on Friday, May 13th.

Avalon Police Department Detective Matthew Sykes, Sergeant Sean McNair, and Patrolman Tujuan Baile joined Avalon Deputy Emergency Management Coordinators Paul Short and Kevin Scarpa for the Police Unity Tour Chapter 2 which includes law enforcement personnel from the southern New Jersey region.  Sykes, McNail, and Baile rode their bicycles from New Jersey to Washington, DC to raise funding for the Museum Hall of Remembrance to honor those who sacrificed their lives in the line of duty.  The Avalon Rescue Squad provided support services to the riders through the State of Maryland.

In 1999, 22 members from southern New Jersey began Chapter 2, seeing the need to expand the Unity Tour Family.  Since then, the Chapter has grown to well over 200 members.  Each year the Tour departs from a central or southern New Jersey town and continues with stops in Delaware and Maryland.  On the final day of the Tour, the Chapter merges with Chapter 1 from northern New Jersey to renew the partnership and ride together to the National Law Enforcement Officer’s Memorial in Washington, DC.

For more information on how you can support this effort, please visit www.policeunitytourchap2.com.