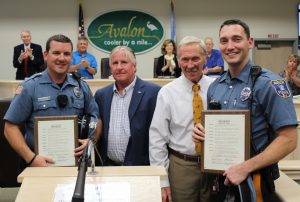 Avalon Mayor Martin Pagliughi and Council President John McCorristin presented proclamations to Avalon Police Department patrolmen Mark Glassford and Matthew Ardelean during the Wednesday, October 11th meeting of the Avalon Borough Council.  The proclamations were offered to the officers for their heroic efforts in saving a despondent man’s life in the ocean off Avalon’s 16th Street beach during the early morning hours of Sunday, September 24th.  Patrolman Glassford entered the ocean in chest deep water to have a conversation with the individual and convinced him to come ashore to safety.  Patrolman Ardelean ensured that both men were safe in the ocean during the conversation.