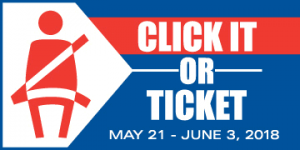 Seat Belt Enforcement and Education Campaign to be Conducted Locally as Part of Nationwide
Click It or Ticket Mobilization May 21 – June 3, 2018

Avalon, NJ — Law enforcement officers from the Avalon Police Department will join with police from around the country in cracking down on unbuckled motorists and passengers as part of the national “Click it or Ticket” campaign.

Beginning May 21 and running through June 3, the annual “Click It or Ticket” mobilization utilizes high visibility patrols, and national publicity efforts, to reiterate the life-saving value of seat belts.

“The use of seat belts saves many lives each year and this campaign helps to increase awareness and promote seat belt usage”, said Chief Jeff Christopher of the Avalon Police Department.

In 2016, it is estimated that more than 14,500 lives were saved nationally by the proper use of seat belts.