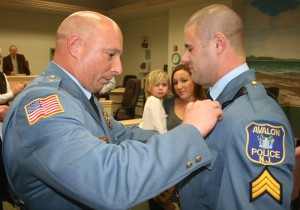 As a Patrol Sergeant, Glassford will be in charge of his shift at the police department, overseeing both patrolmen and the dispatcher.

Glassford is a seven year veteran of the Avalon Police Department.  He lives in Belleplain, NJ with his wife and daughter.  Patrol Sgt. Glassford worked as a Class II Officer in the city of Wildwood after serving in the United States Marine Corps for five years where he attained the rank of E-5 Sergeant.